Going Dutch on the ‘Old’ Rhine.

Learning to speak a foreign language is a daunting business when the world wants to speak yours. My ex got me interested in speaking Dutch, first out of curiosity and then on the off-chance that the children might want dual English/Dutch nationality in later life and perhaps ought to speak their mother’s tongue – wrong call!

The opportunity arose to live in a nice (old Roman) town called Alphen on the Rhine (Alphen-aan-den-Rijn) at about 15 feet below sea level. The nightmare’s of being flooded soon passed;-). I drove to work in Zoetermeer (Sweet Lake City) through relatively rural farmland, and due to the zero gradient got about a zillion miles to the gallon! For connoiseurs of Dutch Waterways this would be the ‘Old Rhine’ and not the main shipping lane from Europoort down to Basel.

I have great memories from Holland with my family and colleagues at TechnoDesign. Also I can sing along a bit to Frank Boeijen and Blof.

The Dutch love ‘colour’ and so paint everything as bright and colourful as possible, including their fields, clogs and everything else besides incuding their bicycles!. I guess its a natural reaction to a two dimensional environment, so flowers and colour and tidiness and orderliness abound. These people have a respect for their land borne from historical disasters and having to raise it up from and continually contend with the sea. For me the colour, the ‘painters light’ and the distant horizons all around and all the time, messes up one’s head (in a creative way ;-). It’s the opposite of vertigo! I think all those horizontal and verticals affected Piet Mondrion too. 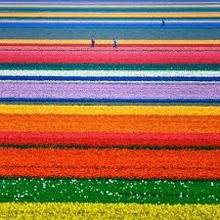