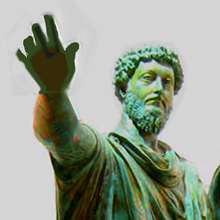 Thanks to the wonderful Ridley Scott, most people will know of Marcus Aurelius from the Gladiator movie as played by the one and only Richard Harris, shortly before he died. The masterpiece that is now known as the “Meditations” was originally titled “To himself”, and was never intended to be published. This explains the ecxeedingly personal tone and private castigations of self that pervades his ‘thought diary’. This is a man who’s clear thinking and intelligence turnd him into the ‘philosopher King’, much like the later ‘Alfred the Great’ and he considered his whole life as an ongoing project in stoic philosophical school though never really felt he lived up to its ‘sobering’ principles. The nature of the man is thereby revealed. Despite holding the most powerful position in the known world he remained thoroughly grounded in his life and his philosophy. Aurelius showed that to be a truly great man one must be uncorruptable by power, seek wisdom and understanding, but more so to ‘situate’ and ground oneself in the world through homage to and belief in a theistic system and a philosphy of conduct.

Marcus Aurelius has left us an incredible gift.

Do not trouble yourself, keep yourself simple. Someone does wrong? He/She does wrong to himself/herself. Has something happened to you? Fine. All that happens has been fated by the Whole (universe) from the beginning and spun for your own destiny. In sum, life is short: make your gain from the present moment with right reason and justice. Keep sober and relaxed.

That all is as thinking makes it so – and you control your thinking. So remove your judgements whenever you wish and there is calm.

Possibly my favourite of all:

We should all attend to things like these, observing that even the incidental affects of the processes of nature have their own charm and attraction. Take the baking of bread. The loaf splits open here and there, and those very cracks, in one way a failure of the baker’s profession, somehow catch the eye and give particular stimulus to our appetite. Figs likewise burst open at full maturity: and in olives ripened on the tree the very proximity of decay lends a special beauty to the fruit…So any man with a feeling and deeper insight for the workings of the Whole (Universe) will find some pleasure in almost every aspect of their disposition…he will see a kind of bloom and fresh beauty in an old woman or an old man…