PostScript is a programming language that was invented by Adobe Systems way back in around 1984. Actually when I think of it, it was Aldus Inc. who were the real inventors with their application ‘PageMaker’ which was bundled with the original Macs. In the typography wars of the 90s’ PageMaker got wiped by QuarkXPress, and the Mac and QXP became the bastion of London graphic design studios. Quark lost the plot in the 00’s and PageMaker, repackaged as InDesign, came back all conquering. Integration between InDesign, Illustrator and Photoshop, plus Adobe’s ownership of the underlying PostScript and PDF technology proved too powerful.

PostScript’s primary role was to furnish a printing device with all the instructions to enable it to draw the output on the printed page. PostScript was also the underpinnings of Illustrator and became what we now know as Acrobat PDF format.

Inside a couple of hundred design agencies

So as a Tektronix colour technologist I would do the rounds of hundreds of graphic design agencies from Brick Lane to Camberwell, Islington to Isle of Dogs, Tottenham Court Road to Leicester Square. I would assist agencies get the right colours from their design proofs, using TekColor and modifications of it by adding custom colour profiles. It was just about this time that Color Management arrived, and on the Mac it was ColorSync though AGFA were big players at the time and had a good product called Colortune.

Colour is critical. Everyone wanted accurate Pantone colour matched proofs in their studios but never could get around the RGB CMYK colourspace problem. Reflected light (print) is subtractive and transmitted light (monitors) is additive and never the twain will effectively meet. Tektronix equipment supplied a straightforward result, it would output printed colour in Euroscale or SWAP colourspaces emulating Offset Presses. TekColor was just postcript code that downloads to the Postscript Hardware on the printer and which modified the printer’s output colourspace (‘gamut’)

The major misunderstanding is that a printing device is a four colour printer (C,M,Y, K) whereas Pantone is a specially blended (solid) colour. The only way to start matching to a solid Pantone is to use the “Pantone Solid to 4 Colour Process chart”, and use the Pantone equivalent CMYK values from the book. Of course like most things you can take it to the next stage. To improve the simulation, rather than match to a colour book, you could actually match directly to the ACTUAL printing press you were proofing for

The pinnacle of my colour work came when I purchased a Colortron (a £150 spectrophotometer) and started measuring the colour output of the Presses at Kent Messenger Group. I could create a colour profile for the print output and place that into a postscript file, download it to the printer (a Tektronix Phaser 300i – printing on the same newsprint as the Press). The Printer would now produce exactly the same colour output as the Press, as well as simulate the Press colour halftone pattern rather than it’s own default FM (stochastic) pattern. Colour matching made simple. 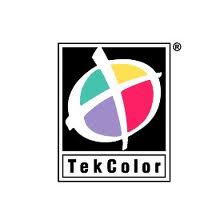