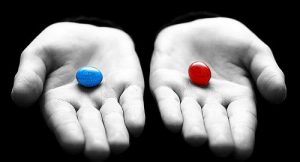 The physiological states of FEAR & HATE versus the redeeming conscious states of LOVE and FORGIVENESS. It’s our choice, our life, our well-being! Our conscious states are tethered to our physical body / the physical world. If it weren’t so there would be no point of exercising it as it wouldn’t exist for us in material space. Naturally Consciousness can only be experienced by the physical phenomena that it produces. These are forces, such as creativity, action, expression. It is the initiator, the ground of being…the prime mover…. God.

The question is NOT whether God exists or not. Things, ideas, concepts in themselves don’t really matter that much. What matters is what we fundamentally BELIEVE to be true, and therefore how we align and conduct ourselves based on our beliefs. If we believe we have a divine flame within us, and by extrapolation, in everybody, our perspective and relation to ourselves, others and the World immediately changes.

Move from the first pair of states ( Fear and Hate) to the second pair ( Love and Forgiveness) and you have Redemption!..the ability to psychologically save oneself! However this can only be done in a state of equilibrium. i.e receiving the benefits of the redemptive qualities of love and forgiveness can only be achieved by actively (consciously) expressing and repeating the same love and forgiveness. This is the key or Law of the Stimulus-Response level of behaviour in the Unconscious mind – expression and repetition creates its belief, which through ignorance is somewhat or totally independant of the beliefs of the conscious mind. The ‘Self’ and the ‘Other’ are therefore not truly independant entities!!! (See R.D. Laing – The Divided Self).

Real truths are therefore buried or obfuscated and our attentions diverted on purpose by those who wish to control and manipulate with their agendas: orthodox religion, government and their establishment propaganda, big pharma, privately funded biased science, you name it. The list is endless. We have to ask why is PersonKind this way. Jordan Peterson would say that all systems are hierarchical and eventually societal ones become corrupted and misaligned from their original idea and purpose. Perhaps that’s what entropy is in a psychological sense, the disintigration of morality and ethics by power. If “absolute power corrupts absolutely”, then power just corrupts the indvidual exercising it and the mechanisms by which it is achieved. This is simply another case of disequilibrium.

When consciousness is aware, unfettered and unconditional, all things are possible, even unpicking the knots of ones own faulty conditioning. When consciousness is unaware or fettered and conditional, only certain prepogrammed behaviours and emotional/hormonal states are evoked. Autoregulation and equilibration are the ‘phenomena’ of Life. Life exists and develops through Adaptation, whichn is the modification of the self through which an equilibration with the external environment can be maintained, an ‘accommodation’ to the external but also an ‘assimilation’ of it. Adaptation is also a psychological phenomenon not just a physical one. see Jean Piaget – ‘Biology and Knowledge’ (1971), and ‘Adaptation and Intelligence’ (1981)

All directed behaviour is either under consciousness awareness on under unconscious pre-programmed control. Consciousness is awareness and inextricably linked with time such that it is in this moment, right now and ‘imminent’ and so is rightly called ‘presence’. What else is considered imminent? The concept we name as God.

So… if according to Meister Eckhart a free mind can achieve all things then we must remove the pre-programmed emotional stress inducing states and the issues that create such limiting and debilitating states on the body. The internalisation of fear that is induced through the experiencing of traumatic events such as violence, deceit, hate, debasement, as well as everyday issues such as the sensationalism and propagandising by the News Media.

‘Biological stress’ can also occur from events such as accidents. When I was five I accidentally got locked in a caravan cupbard for about 20 minutes with my brother. The fear induced my claustrophobic avoidance behaviour for the next 10 years. I would not stand in confined spaces and always took the stairs and not the lift. Such emotional states things are not only ‘psychological’, but also ‘physiological’ ( hormonal) and triggered by the state of one’s mind. Fear causes the production of adrenaline and cortisone and when subsumed to the unconscious is therefore ever present in its behaviour triggering ability as well as in increased base levels of stress. We all know what happens to people who use steroids for prolonged periods, body builders and athletes etc… they age dramatically, develop degenerative diseases and die young. Steroids like ultraviolet light causes damage to telomeres and reduce the quality of DNA and RNA replication. Such effects must decrease the efficacy of stem cells, casuing prematuure ageing and degeneration.

If this were the whole of the issue we might stand a chance. The problem is that there is another issue to be resolved: HATE. This state of mind also has a ‘physiological component’ and as far as I can see is programmed into us by society and trauma. In this modern Capitalist society where fairness doesn’t come into the equation, and where people are incited (programmed) to relentlessly consume and therefore chase after often pointless material goods in the search of happiness, the next dopamine fix, and the next diversionary tactic, then the eventual outcome doesn’t look good for us all. Humanity exploits itself and separates itself from its true nature. Dogma and propaganda subvert our mental states, prey on our tribal group instincts and infuse us with an illogical non-biological form of untruth.

When societal disturbances are assimilated into the psyche the human becomes unbalanced and autoregulation breaks down. In the current paradigm, society has to hoodwink itself in order to allow it to kill its own through ignorance and stupidity ( pesticides, herbicides, electomagnetic radiation, banker funded wars, prescription drugs etc. Such is the collateral damage for an unbalanced Society attempting to maintain its unbalanced state. Like all viruses, if Society were too successful and wiped out all its subjects ( or hosts) then it too would become extinct.

Perhaps society as a higher order ‘psychological structure’ in itself’ is not conscious of itself, and therefore too is dis-eased, dogmatic and fixed to pre-programmed unconscious behaviours to see it no longer follows the rules of LIFE, that of balance or adaptive equilibration! Or worse, perhaps it’s all entirely planned and consciously directed behaviour?

How can an individual retain any form of equilibrium. As Eckhart says… to stand in right relation or perspective to oneself, others and the world, we have to step beyond our exisiting frames of reference to a higher plane of consciousness in order to then see ourselves correctly at the lower level, and moreso, objectively. Such transformations transcend the standard paradigm. Transcendant states are a scientific requirement for the growth well-being and development of our conscious minds.