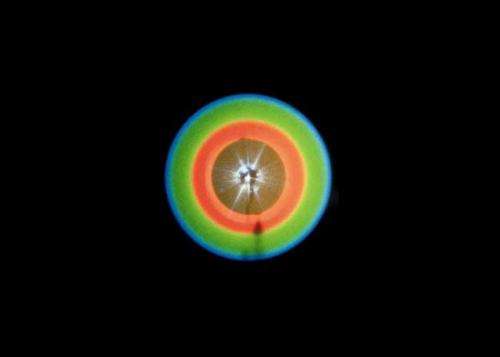 It is no surprise that societies, religions and mystics revere light and incorporate its ‘nature’ into our ideas and our experiences. Obviously without it, life wouldn’t exist.

Light ‘illuminates’ the darkness’, Christ is the ‘Light of the World’, wise people are ‘enlightened’, mankind became more ‘conscious’ during the ‘enlightenment’ and so on and so forth.

I recently read the following (mis)quote:

“When a photon is absorbed by an electron, it is completely destroyed. The opposite happens when an electron emits a photon. The photon is not selected from a “well” of photons living in the atom; it is created instantaneously out of the vacuum. The electron in the high energy level is instantly converted into a lower energy-level electron and a photon. There is no in-between state where the photon is being constructed. It instantly pops into existence.” – Source: Ask an Astronomer.

So at the subatomic level things only seem reasonable if the photon behaves as an electromagnetic wave that combines with an electron to raise its state or is ejected as wave energy when the electron lowers its state. However, If the photon is perceived as a discrete ‘particle’ (of zero mass btw ???) then its creation and destruction call for the supernatural. The fact that the photon can only be described in certain observational situations as behaving like a particle of matter and at other times in experiments only as wave energy, seems to me that the true nature of energy and matter are currently beyond the scope of current scientific description.

Perhaps the reduction or fragmentation to ‘discrete entities’ of energy and matter is the wrong way to view the phenomena. It could all just be energy which coalesces into ‘matter’ in three dimensional space’ as states of crystallisation (solid), condensation (liquid), expansion (gas) and chaos(plasma). This begs the question “at what point does energy materialise (i.e, become matter)?”. The answer must be Light, or in the scientific notation ‘the photon’, which itself demonstrates the fundamental aspect of atomic nature as an ‘illumination’ when in this ‘unbound’ energy state.

So photons ( taking the observation of photosynthesis as an example) must only be pulses of energy with the potential to be absorbed into and thus be materialised as modified states of ‘matter’. Like when a wave hits the shore, the energy gets transferred at the intersection points of fields and matter. Here the dual nature of light is apparent. Light energy is a flux ( a process or movement through time) which becomes materialised into a state outside of time as its movement ends and becomes solidified). The process is reversible, otherwise there would be no light! We all know that the movement of matter creates energy in the form of light, heat, sound, electricity etc and all are vibrations within their fields of motion.

Light is therefore the visible creative force that transcends from energy into matter, and from matter into energy so allegorically alluded to in all our religious and spiritual texts.