Bookham is derived from “Bocham” the Anglo-Saxon for“The Village by the Beeches”. The first historical record of Bookham is circa. AD 675, though the North Downs Way is thought to be thousands of years old. It was the M25 for Stone Age Man, and oddly enough the M20 and the south of the M25 do exactly the same route, linking Dover (and the continent of Europe) to Canterbury (the most significant Ecclesiatical establishment in the UK) and from Canterbury to Winchester (capital of Saxon England and Alfred The Great) via the market town of Guildford.

Driving into Bookham is only really possible either from East to West or West to East. That is if you exclude the Polesden/Westhumble route over the top of the Downs (which is about 10 ft wide and has a twisty uphill 1 in 5 to negotiate. In Autumn when the sun is low and golden, driving west into Bookham on the ‘top road’ is a sight to behold… there is nothing to obstruct the Sun other than the naked row of trees along the road. The wide plain of the North Downs on the left plays host to breathtaking Autumn sunsets.

With its springs and its elevation on high-ish, well draining downland, Bookham made the perfect resting place for weary Pilgrims of any or no denomination.

St. Nicolas Church is a beautiful example of a flint Church, with outstanding Flemish Stained Glass Windows and the coolest kneelers anywhere. It dates from about 1090AD, with the original four corner columns still there. The original 11th Century patterned painting can still be seen around one of the original windows that got incorporated into the bigger church building in or around 14th Century. 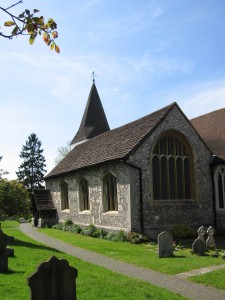 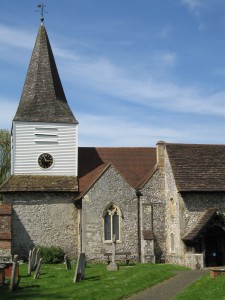 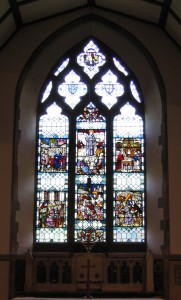